In 2013 I was particularly interested in exploring the nature of the decision-making process of making art, and the idea of authorship generally. I began to experiment with allowing aspects  of physical artworks to be generated by chance. I started by throwing dice and using other games of chance to decide the length and directions of various lines I would draw on a wall. Soon I realised that computer programming could be an ideal replacement for this, since it can be programmed to generate randomness, and also seemed to me to provide a more active agent in the decision-making process. I had a few early attempts with applications running an old programming language called BASIC, which I’d played about with as a teenager on an old Sinclair computer. 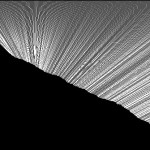 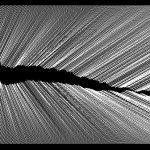 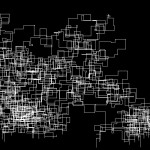 I was able to generate a few interesting things by setting up loops which would run repeatedly and draw sequences of lines, some of the coordinates being randomized by the computer. I wanted something which would allow me to interact more with and influence what was happening on the screen. I soon discovered Processing, an open-source programming language, and did my best to get to grips with it. I wrote some code which made a grid, and plotted lines from one point to another with each key-press. I had made a similar physical grid on a wall with screws, and used coloured wool to trace the design exactly as the computer directed me. 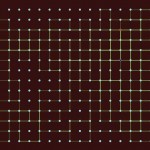 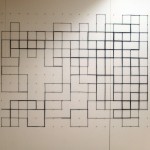 I was able to change the variables in the code to make the program favour particular regions of the grid, or make diagonals etc. 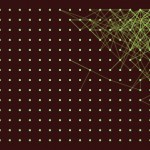 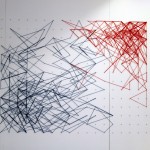 I later tried to write programs that allowed the user to generate their own imagery, giving them a degree of control over where elements were placed by clicking regions of the screen, but having the computer randomise aspects of the design. This one, for example, would place a rectangle of random dimensions and density where the user left-clicks, while right clicking darkens and partially erases what is already on the screen. The colour is randomly generated from a set number of options, to give a sense of aesthetic consistency. 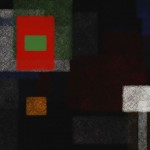 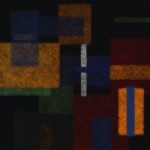 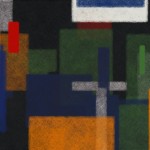 This was interesting, as the user has a lot of control over aspects of the design, but encounters an element of risk in adding to a composition the they might like. An unexpected shape or colour may throw off the balance of the  work. In this way the interaction with the program becomes a sort of game, with elements of reward and penalty depending on the outcome. 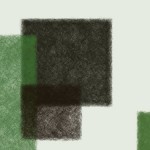 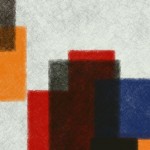 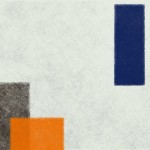 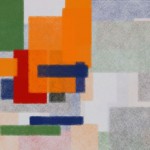