On 30th January, 2016, the West Cork Arts Centre, Skibbereen hosted a questions and answers session with with the six participating artists in their current exhibition “Unfold”. The artists were myself, Johnny Bugler and Rosie McAuliffe – members of Cork Printmakers fine art print workshop, and Cork County-based artists Simon English, Sarah O’Brien and Rob Monaghan. Also present were Ann Davoren, director of the centre and Valerie Pentek, director of CorkPrintmakers. The project was funded by the Cork County Council Arts Office, and the participating artists had been awarded their places by a selection panel on the basis of written applications submitted earlier the previous year.

The preparation of work for the exhibition had begun in the Summer of 2015, when all six artists had come together for an intensive two-week residency in the Cork Printmakers workshop. During this time, the aim was for myself and the other two Cork-based artists to provide tuition in printmaking techniques to the other three artists, who in general had little experience in the area, in order to allow them to explore print within their own practice, and possibly make a body of print-based work. There was no expectation of this however, and although all six artists ultimately had printed work in the show, there had been no expectation of this on the organisers’ part. The only obligation was to deliver a show in the venue with work from all six artists, coming out of the collaborative process, with no other themes set or specific curatorial input.

The residency in Cork had been extremely busy and productive, and we’d ended up giving the three visiting artists a thorough grounding in pretty much all the major print techniques, including screenprinting, relief, lithography and etching (both traditional and photographic.) We’d had concerns along the way that this amount of information may be a bit overwhelming, but the visiting artists’ appetite for knowledge was insatiable, so we kept up the pace! By the end of the fortnight a great deal of work had been completed to a great standard, with all the artists really getting to grips with the methods and techniques. A lot of decisions were quickly made about what aspects of print worked for them individually, and what parts of the processes and methodologies were maybe not so relevant to their work. The option was also there for the artists to come back after the fortnight and spend more time finishing and refining their projects, which they did.

The show in the West Cork Arts Centre opened on 15th January 2016, and was a very diverse collection of work, comprising projected and screen-based video, painting, mixed-media installation, and a large amount of printmaking of many different types. It took place over both floors of the gallery, with the six artists’ bodies of work being split up and allowed to flow into each other, and distributed over the entire space, giving a good sense of continuity between the two main exhibition areas. 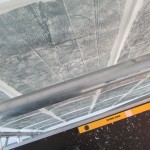 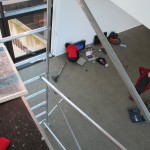 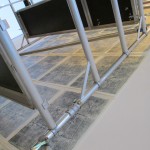 The artists discussion was a nice addition to the program, and was very well attended, with a lot of good input and thoughtful questions from Valerie Pentek, Ann Davoren and the audience. It ran for the best part of an hour and covered a lot of ground, but a few issues in particular came out of it that stuck with me.

An early question was asked about the motivations the artists had for taking part in the project, and the answers ranged from an interest in showing work within the architecture of the building, to a desire to learn about the particular processes of printmaking, and also a more general interest in the artists expanding their general experience of collaboration.

Some good points were raised about the nature of working within the very specific environment of a busy printmaking workshop, and what effect that had on the experience of making work, particularly for the county-based artists. It was generally agreed that it was a positive experience, with one of the artists stating that he wanted to immerse himself in this experience as much as possible, enjoying the often ordered, sequential approach needed in some of the techniques. Others remarked that they found this aspect of printmaking to be more of a difficulty, and could have done without some of the more time-consuming, labour intensive aspects. The Cork-based artists made the point that this was one of the more challenging aspects of the residency, trying to find techniques which would cater to the visiting artists’ particular interests and working habits, which was a matter of some trial and error.

The more general point was made that the experience was very good in terms of forcing all the artists to consider ways in which to push printmaking into areas not traditionally associated with it, and to tackle the still widely held misconception that it is a form which remains strongly tied to restrictive historical conventions. All three Cork-based artists’ practices incorporate aspects of printmaking but with a heavy emphasis on installation, video, sculpture and mixed media works, and all agreed that they benefited from the opportunity to expand further on this. It was emphasised that although it is important to learn the methodologies of printmaking well, it should never be treated in a precious way and should be adapted to whatever a particular artist’s needs are, and that aspects of it can be a very responsive and immediate if required.

Everyone agreed that the projects and exhibition had been  well planned and organised and had been a very rewarding and worthwhile experience to be involved with. 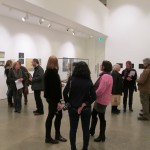 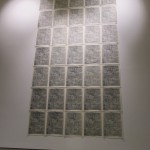