On the invitation of art teacher John Twomey, I worked on a collaborative project in Bandon Grammar School, Cork, with a group of transition year students as a visiting artist. The brief was to produce a large scale artwork or series of artworks which could remain on display within the school building, which would relate strongly to the subject of mathematics. We decided to use a modified version of my earlier interactive piece modUlar which had been exhibited in the Hexagon show in 2014. Given their interactive potential and concern with geometry and pattern, the multiple, modular components were considered to be a good fit for the brief.

As there were only three days available to work with the students and complete the installation of the artwork, John and I designed a schedule in which we allocated the first day to the marking and cutting out of the several hundred pieces required from foam-board, which had already been painted in a selection of colours by some of the students. The second day was to be devoted to assembling them into finished art pieces and the third for the final installation of the artworks in the allocated space. My particular interest in this project lay in observing how the students would use their own initiative and work together to author the pieces into artworks. I gave a brief introductory talk in which I outlined the concept and development of the modular pieces, and demonstrated the various ways in which they could be fitted together. Other than a brief brainstorming session during which some potential ideas were discussed, John Twomey and I left it entirely up to the students to decide what they would choose to make from the pieces, how they would organise themselves into groups to work and whether they would make several individual artworks or all collaborate on a single piece.

At the end of a very labour-intensive first day, almost four hundred individual components had been marked out and cut by hand. On the second day, out of a group of twelve students, about four groups had loosely formed which began to work largely independently of each other, each with different structural concepts and approaches to colour. The forms being built were essentially abstract, each group experimenting with various configurations of the components without necessarily attempting to build a sculpture which resembled anything to be found in the natural world or possessing any particular narrative content. At first it appeared that the end result of the project would be a series of distinct, abstract sculptural objects. 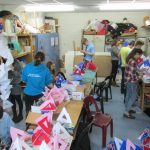 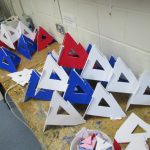 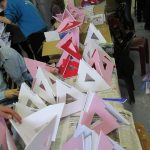 After a lunch break however, having become more comfortable with the components and gained some confidence in fitting them together, the individual student groups began to come together and have conversations about the possibility of combining their efforts into one or more single pieces. After a period of discussion, some of which was concerned with the television series “Game of Thrones”, it was decided by the student group that everybody’s efforts for the remaining time would be best concentrated into making a model of a large dragon, a creature which features prominently in the series. As well as being highly relevant in terms of contemporary popular culture, the dragon would be a very apt choice as the designated space was a large glazed atrium area within which the final work would be suspended far overhead, giving the appearance of the dragon flying down from the sky into the school building.

Once this decision was made, a focus on a more inclusive form of collaboration and a renewed, tangible urgency was evident in the entire group’s behaviour. A large pyramid-like structure was designated as the dragon’s head, for which horns and teeth were quickly fashioned and added. Two chain-like elongated sections became the neck and spine, and a separate team took on the task of assembling a large pair of wings from the numerous off-cuts left over from the previous day’s cutting. Within a couple of hours all the individual body parts were ready, and the final creature, almost five metres in length, was finally installed in the school building. 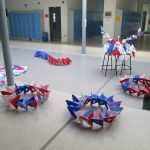 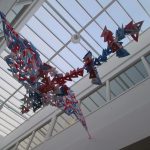 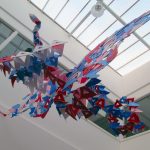 For me, these projects would appear to reinforce the value of modular toys or tools which provide the potential for producing a very wide range of outcomes yet, unlike the almost complete freedom offered by materials such as clay or paint, intersect with each other in a predetermined, and limited number of ways. This encourages the user while building with the components to consider the rule-set inherent within their design, while also conceptualising the actual form they wish to build. If a particular object or cultural artefact is in mind, such as a bicycle or dragon, the resulting familiarity can make the process more meaningful and engaging, and a successful replication that much more satisfying and measurable.

The final installation is a testament to the creativity and sense of ambition of the students involved in the project, and was made possible with the support of the Creative Engagement Programme.