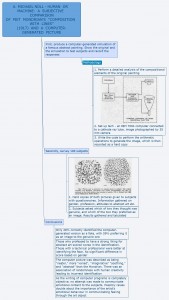 A very informative talk by artist Conor McGarrigle, given in the Glucksman Gallery on 29/10/15, as part of their series of talks coinciding with the George Boole themed show “Boolean Expressions” currently running there. He used the talk to give an overview of his own practice, which incorporates considerable use of technology, the internet, databases and data collection systems. To give context to his own practice he gave quite a comprehensive overview of the history of artists’ use of similar tech in history, tracing a line extending from the 1960s to today. Some of the content was surprising to me, as some heavy hitters from that era, such as Robert Rauschenberg and Jasper Johns, artists previously well known to me as innovative painters and sculptors, conducted a lot of experimental work with what was then newly emerging tech.

Three main aspects of artists’ engagement with emerging technology were identified. These were; system – artists being able to incorporate existing technological systems into their work, communication – the first communication satellites were now in orbit, offering unprecedented scope for connectivity, and Utopia – the exciting prospect of a connected world, the breaking down of barriers between art and the sciences etc. The early days of this endeavour were marked by difficulty in artists and other creatives being able to access this tech, as it was new, owned by big corporations, and hugely expensive and intimidating. This was followed by a period from the early nineties on, where a far greater availability and accessibility to technology, largely afforded by the emergence of the internet, led to a far more independent, anarchic period of activity. However, McGarrigle sees in recent times something of a reversal of this trend as artists need more help in gathering and dealing with the huge volumes of data currently being generated.

A major player in this history was the electrical engineer Billy Kluver. From 1967, he was involved in Experiments in Art and Technology (E.A.T.) with the artists Robert Rauschenberg and Robert Whitman. This group was set up to initiate collaborative projects to allow artists and engineers to work together directly. This I found particularly fascinating, as though I was familiar with Rauschenberg’s work as a painter and installation artist I hadn’t realised he was involved in such cutting edge research at such an early point.

Recently I began to get interested in using computer programming tools to attempt to replicate paintings from the early Modernist period, particularly those in the style of geometric abstraction. There were a number of reasons for this. Firstly, I have long been a fan of these works, from artists such as Kazimir Malevich, Piet Mondrian and El Lissitzky. Though their works, to the modern eye, may seem a little tame and academic, their departure from any type of representation was at the time truly revolutionary, living as they did through great political and scientific changes in the early part of the 20th century. I was also interested in introducing elements of interactivity into my own artworks, and thought this might allow me to develop some skills to this end. There was also an interest in the general area of trying to somehow codify aesthetics, to see if there was some sort of algorithm for beauty, a question which fascinates me. Also, I was enjoying dicking about with programs to see if I could make them do cool stuff.

The first painting I focused my attention on was a famous Mondrian work, Composition With Lines, from 1917. I was advised to try an open-source Java-based animation tool called Processing, and began to work with it. Due to the relative formal simplicity of the painting, I was able to get a passable program working which allowed the user to generate their own version of the artwork by moving the mouse around while holding down a button. (The working interactive sketch is here http://dominicfee.info/uncategorized/albers-simulator/)  With a little research into other attempts to generate historical paintings with coding, I was surprised to find that I had been beaten to it by the American computer engineer A. Michael Noll, by about 50 years. In 1964 he had taken this exact painting and written a computer program to replicate it. Not only that, but according to research he did at the time, the majority of people he surveyed preferred his computer-generated artwork to the Mondrian original. The following pdf explains Noll’s methodology for the project, and draws some subjective comparisons between the genuine and simulated Mondrian paintings.

He makes some interesting observations on the fact that the simulated versions contained more randomness in the arrangements of the graphical elements than the genuine artwork as a result of the nature of the programming algorithms used. Despite this, the simulations created a more profound emotional response in the test subjects, causing Noll to speculate on the nature and perceived importance of the artist’s ability to manipulate and affect the emotional state of his audience.

This is an interactive canvas to allow the user to try and simulate the famous Mondrian painting “Composition With Lines” (1917), shown above. Just move the mouse around while pressing the left button. Press a key to start over.